… and I haven’t even been posting since late spring!

Hey dear friends! Yes, it’s been a really long time, shame on me. Though, there wasn’t really a day I haven’t been thinking about many of the friends I made through this blog, and about how much I miss to post. Especially, I sometimes would just like to write little everyday blog posts, to remember them and to share them with you. Maybe that’s how I should do it, so it’s just a part of daily life. Even if I have days with migraine, I could still do something little. There are so many of you and other bloggers, who have so much more to deal with than I do, and they still post constantly.

Almost a whole year with Ralph in Austria

Anyways, the months just raced by since Ralph and I got married and we would like for time to go a bit slower. Maybe it’s because we’re just really happy! In addition, it’s almost a year now that Ralph, Samantha and Sonic arrived in Austria! It was way past midnight on September 16, 2017 that I picked them up at the airport in Vienna. Since then we’ve been together every day and enjoyed it all, except for crazy bureaucracy of course…

On October 4, it will be a year that we’ve been in our apartment, our home!

It was a rather rainy spring and summer, with the temperatures way below of what they normally are. So it was a big difference for Ralph, coming from the lovely warm southern Spain to southern Austria, where it started off as a very cold and rainy fall late 2017, then turned into a very very cold and snowy winter that lasted till March, and the spring and summer were like I said rainy and too cool. That whole year was nothing like it normally would be here. Hopefully, it will be back to normal next year…

We also had a couple bad storms in the early summer. One afternoon, I just barely made it into our building, when the hail started falling behind me, with hailstones as big as golf balls… Another storm came through the same month, and the storm wind ripped off flat metal roofs, big trees fell and even the tree in our garden is now just half of what it was.

The photos in the following slideshow show the damage of that storm in the park near our home. It looked like this all over Graz though.

Unfortunately, by the end of August, I noticed Murli had her little tongue out slightly all evening and didn’t close her mouth completely, but I could not see anything, and she was eating normally too. The next morning I saw that her lower left fang was leaning all the way to the left. It was obviously loose, as it wasn’t like that the night before. We had no idea what was going on, or how it happened. The only thing we could think of was that she might have had an accident while jumping. Murli acted completely normal, was not in any pain, as she kept eating without avoiding one side.

But it had to be taken care of so I called our Vet Lady to make an appointment for Murli.

We took a Taxi to the Vet, as it was a bit of a distance from home. As long as Murli is in a carrier she’s fine and not upset. She only gets upset the moment she smells that she’s at the Vet, poor little girl… She wasn’t allowed any food all morning, due to the possibility of sedation.

The Vet and I rolled Murli all up in a blanket to keep her still while she was checked out. The tooth was very loose, and the Vet said she’ll see how Murli reacts and if there is any resistance she will have to be sedated. But Murli didn’t even flinch, it didn’t seem to hurt her, and the tooth was almost falling out by itself. Apparently, Murli must have had toothache a while ago, for quite some time, as the root of the fang had already dissolved. I was quite shocked hearing that, as Murli never acted strangely all these months. She always ate normally, her tail was up all the time and never gave any reason to worry. Normally I notice any little change in her and know when something isn’t right, just not this time.

In addition, the Vet also did blood work, and the results were perfect, except for her liver values, which were slightly elevated. So she got tablets for that, which I give her once a day (she loves them, as they taste like treats). Murli has always had problems with reacting badly to all kinds of cat foods. There isn’t much that she won’t throw up or the the runs from and it was like that since she was a kitten. She has some great food though that she is doing fine with. She also loves anything with milk… Icecream, cream, yoghurt etc. But I now take extra good care that she won’t eat anything except her own food, as anything else could be a reason for the elevated values.  In a few weeks, I’ll bring Murli to the Vet again, for another blood test. Then we’ll see if anything has changed. So we’ll see.

There is a difference now, after the tooth is gone. Murli seems to be really relaxed and even more happy than before. So she must have been in pain in some way before, even if she didn’t really show it, or act like she was. It’s quite obvious now with how relaxed she seems. I feel so bad that I had no idea anything was going on with her. The tooth looked even normal before, you would have never guessed anything is wrong with it.

A few hours later after we’ve been at the Vet, Murli was really happy and having a good stretch up on the fridge <3

As for Sonic and Samantha? They are doing purrfectly fine! We thankfully have gotten some sunny weather now, so the three of them catch up on getting some sun on the balcony.

Especially Murli and Samantha are out on the balcony all the time. Lets hope we’ll have a sunny and rather warm late summer and fall, would be nice!

As of now, I’m writing on another post, and I want to try to post a lot more, even if it’s just tiny little posts or pictures. Documenting life, our life with the cats and whatever else.

Ralph and I want to do a couple things for our apartment. Make it really pretty and get all the lamps and pictures up. It’s lovely already, but there are still some things left that need to be done. I’ll take pictures of it for sure.

I think I’ve rambled on for long enough now…

Have a lovely rest of the week everyone! Much love from Ralph, the cats and me!

28 thoughts on “Oh no, the summer is almost over…” 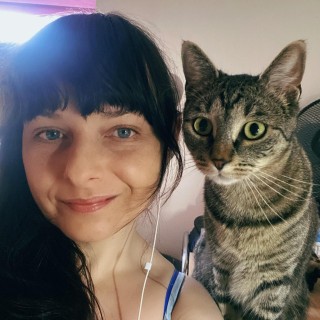