Last Friday, May 31, in the evening, all of a sudden, a little baby Redstart landed on our balcony. It’s a Common Redstart to be exact. It wasn’t there just moments before and unfortunately I did not see it fly up to our balcony, or down to it, from a nest higher up. It must have just left it’s nest that afternoon, to learn how to fly.

With the baby bird on our balcony, I knew why I could hear Redstart’s flying all over the garden and calling relentlessly, seeming quite upset for most of the day. They must have been looking for their baby and weren’t able to find it for hours. I had been wondering what was going on with them all afternoon.

A little later I tried to take a picture from the bedroom window, but that wasn’t all that easy through twice the amount of fencing from the balcony. But you can see the baby’s red tail: 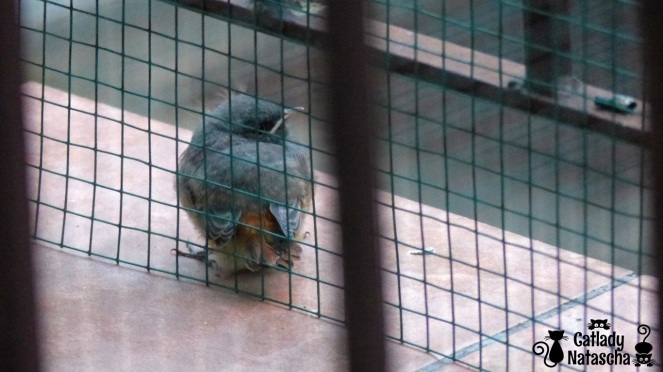 That little one was just sitting still, not moving for a long time, except for blinking it’s eyes. It stayed quiet as well. It was already getting dark when it started calling out, as the parents were near. Finally they were reunited again and I was able to watch the baby as it was being fed on our balcony. I was watching it all from our bedroom window, which is to the right of the balcony and set a bit farther back. Unfortunately it was too dark by that point to get a proper video or photo.

Since I was not sure how well that little one was able to fly at that point, I did not want to risk it getting scared and flying down onto the ground. Because they can flutter down at first, but not really up. So I left the door closed and nobody was allowed out, neither Ralph, myself or the cats. The balcony was to be off limits for as long as the little one would decide to stay. It would have been dangerous if it would have sat on the ground all night, unable to fly higher again. But the baby bird was safe on our balcony, as it’s too high for even a cat to jump onto it.

Here is a video I took with my camera, shortly after I saw the Redstart baby sitting there. That little bit of baby bird fluff that’s still on it’s head is totally adorable:

Before the video with my camera, I just took a video with my phone, not knowing if I would have time to get the camera. The special thing about that video is that you can see one of the neighbour cats hiding in the high grass, stalking. The kitty was actually stalking pigeons that were down on the ground, but she looked up once she saw me and the baby bird.

The next morning, I got up early and looked out of the bedroom window first thing, and the baby was still there. But once I got into the kitchen and carefully looked out under the lowered blinds of the balcony door, it was gone. A few minutes later I saw it on the ground, getting fed by one of the parents. I saw it was able to fly about half a meter higher into the bushes.

Later that afternoon, the parents were calling for their baby again, flying all over the garden, looking everywhere. I was able to film the Mum when she was near the balcony and once on the balcony. Thankfully they found the baby shortly afterwards again.

Since that day, the parents and the baby are together, and there is no more upset calling and flying around by the parents. I hope I will see the young bird again soon, and hopefully get a photo or video of it 🙂

The quality of the photos and videos isn’t perfect, but it’s still a lovely thing that I wanted to share with you all.

Murli, Samantha, Sonic and me wish you all a lovely day!