When I bought Murlis Vet-Food from our Vet-office, I walked home through the park (Volksgarten), as it’s quite a short cut. It was really freezing cold, and it was quite icy. Thankfully I didn’t faceplant anywhere and got a couple of nice pictures. 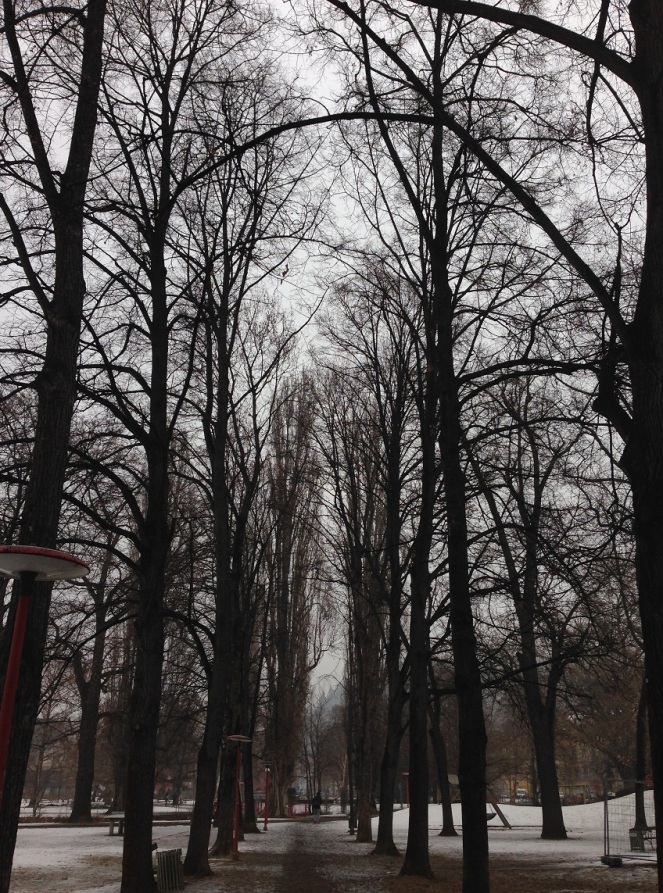 There is a Stupa in this park. It one that stands for Enlightenment, as well as Peace, Wisdom and Compassion. In 1998 the Dalai Lama was here as well.

And this is how icy it was… That’s all solid frozen ice around that tree and everywhere else.

Like usually, I took my other short cut through the property of the local monastery and church, which is open all day so people can walk through here. Otherwise you’ll have to walk a couple blocks around the area, instead of cutting right through here. It’s only used by local residents, as people who are not from this area, wouldn’t really know about it, as it’s not obvious at all.

It’s really pretty too! After the huge parking lot and gardens, you get into one of the buildings, that is adjacent to the church. I really love the inner courtyard with it’s columns. It’s all really old. That’s how it looks from the castle hill (but with zoom, otherwise it wouldn’t look as close): Minorites monastery and church

In the 13. Century, monks of the order of the Minorites, which was founded by Saint Francis of Assisi, started to settle on the other side of the river at first, where the city wall was. Then in the mid 1500s the monks started to settle on this side of the river, where todays Minorites monastery and church is. The Church and monastery was finished in 1607 and that’s how old that building is. There were some later additions, like the two church steeples and facade, build between 1742 – 1744. 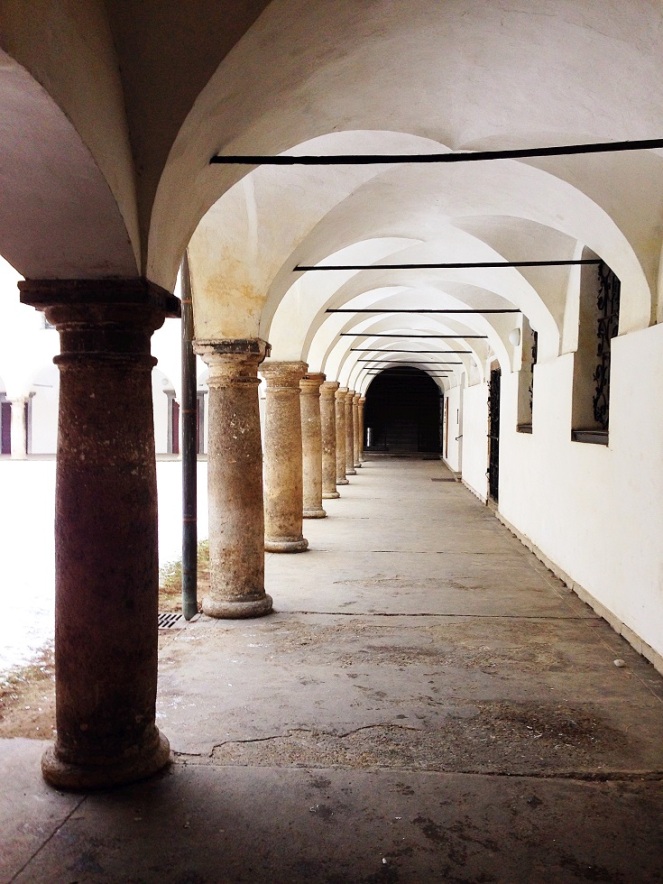 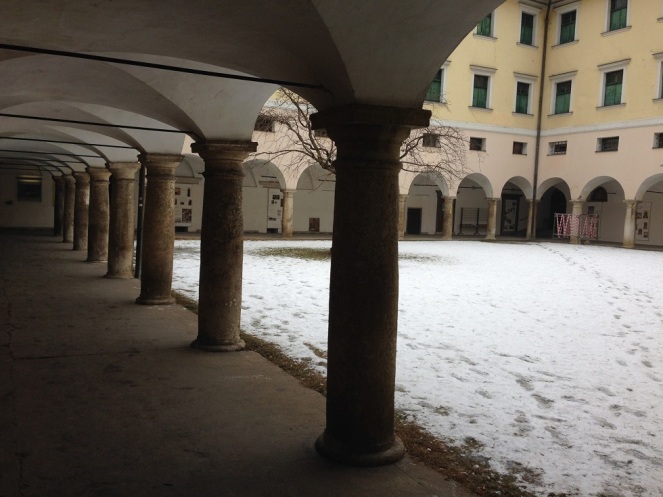 Just wanted to share some pics 😸. Have a lovely day/evening everypawdy!

Woke up today feeling just as well as these past two days; no migraine! Todays weather was sunny and we had a clear blue sky, but it was still cold with an icy cold wind blowing. For as long as it’s cold, I’ll feel fine. Murli feels good too and still does purrfect with her new food. No adverse reactions to it. So her body is apparently doing just fine with it. Otherwise she would have had issues by Sunday. I’m really happy with this!

Because I only got a few packs of catfood from the vet, since I couldn’t be sure she would like it and if her body would accept it. But because it’s all so well, I got some more from the vet today.

On my way between the tram station I had to get out and the vet office, I have to walk by the park (Volksgarten park) and saw my favorite tree again, purrfectly illuminated by the sun and still beautiful with a lot of colorful fall foliage on it.

I already played under that huge tree as a little child. Went there countless times with my Mama as a child. This park is full of beautiful memories for me. Too bad it’s not safe anymore to go through. Sigh…Such a wonderful old tree, that already stood there for who knows how many decades before I was even born. Hopefully this tree will see a better time again for this lovely park. 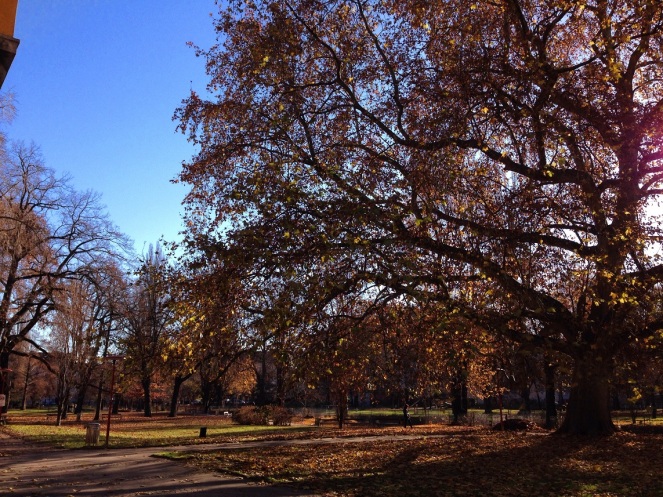 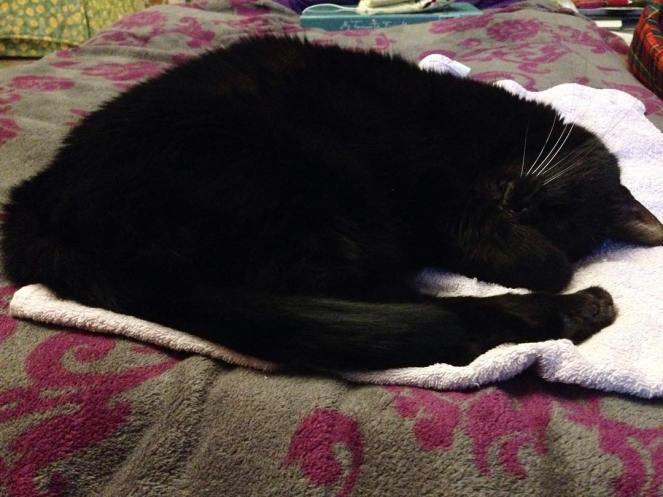 Murli decided to nap most of this #Caturday evening 🐱💤💤💤 via Instagram http://ift.tt/2fCoKxa
Hello pals! Today and yesterday, we were caught in thick fog all day and night. The temperatures decreased a bit in comparsion to the last days, but it was still too warm for November. In the morning, I got Murli special food for allergic cats from the Vet, which got very good reviews from other people with allergic kitties like Murli. Cats who will throw up and get bowel problems from most foods, even if its high quality food. Seems this one really does them well. I just want to see if the skin issues completely subside with it, but that will take a while until I can be sure.

We will see how Murli does with the vet food. She loves it, that’s for sure! Absolutely loves it😸 I’m happy she does, because she’s so picky.

Here are the photos of our dreary weather

On my way home from the pet store, I decided to walk by that one park, after I got out of the bus, instead of getting into the tram right away from there. I knew the trees must look lovely in that autumn sunlight. The sun is already very low at 3pm in the afternoon, now after the daylight savings change. Today the sun set at 4:37pm already and it will be earlier and earlier every day now. 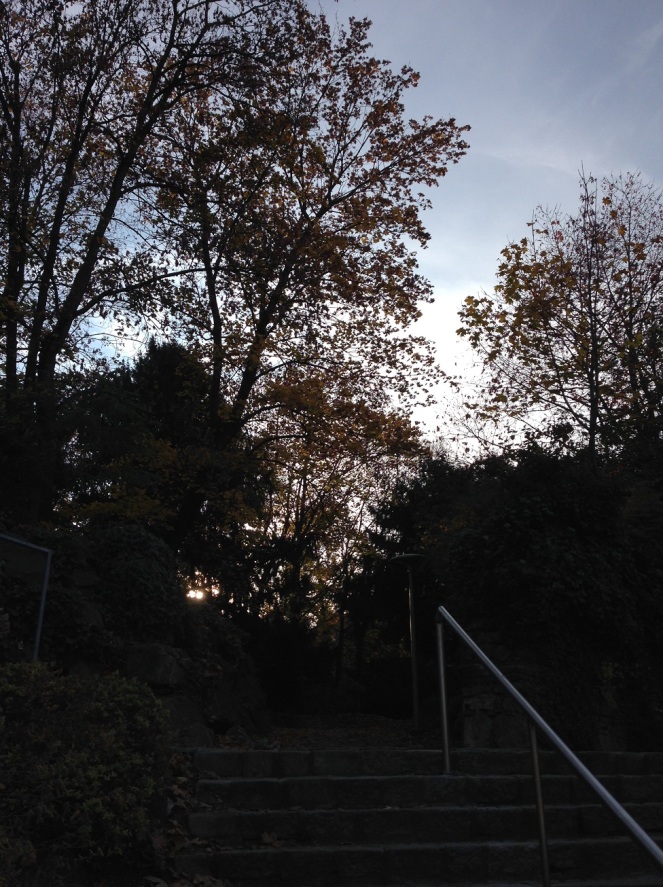 I was also able to take a beautiful pic of the sky, about 15 Minutes after sunset, from a window at home: